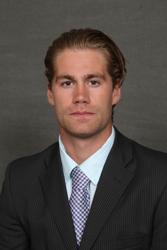 KALAMAZOO, MI – The Kalamazoo Optimist Hockey Association (KOHA) is serious about player development, and, you need to look no further than the Skills Team being assembled heading into the 2017-18 season by Interim Hockey Director, Matt Kakabeeke. Joining an already impressive lineup, KOHA is excited to announce that current KWing, and Tampa Bay Lightning fourth round draft pick (’10), Jimmy Mullin will be part of the Skills Team.

“I love helping the younger kids develop. Growing up in the Cincinnati area, I would be helped by the Cincinnati Cyclones, and it meant a lot to me. I want to teach kids, help them get better, and have fun along the way,” said Mullin. “My favorite part of the summer is going back to Shattuck St. Mary’s - where I played high school hockey - and where I train and coach hockey camps; I love working with young players.”

Mullin spent three years at Miami (Ohio) University (’11-’14) playing in the CCHA and NCHC then transferred to Minnesota State for his final year of eligibility. He joined the KWings in August 2016, but spent the 16-17 season sidelined with a knee injury.

Mullin began skating and playing hockey at a young age, but credits much of his success on the ice to playing multiple sports, “Baseball, basketball, hockey, tennis, lacrosse, soccer, and golf. I don’t believe in kids just playing one sport growing up.” When asked how important getting away from the rink is summers was, Mullin said, “It was very important to me. My escape was playing other sports and being outside. Being a multi-sport athlete has lifelong benefits: coordination, flexibility, endurance, teamwork, time management, etc.”

“We are so excited to have Jimmy joining our players and coaches on the ice this coming season. He brings youthful energy, excitement, skill and the ability to connect with both coaches and players in an impactful way on the ice,” said Kakabeeke.