12U A SILVER KWINGS PAY TRIBUTE TO LOGAN & BRIGGS CONNOLLY

Share
The Hockey Community suffered a tremendous loss recently as two Grosse Pointe brothers, Logan and Briggs Connolly, tragically perished in a house fire.
When our 12U A (08) Silver KWings played the Eastside Bulldogs last weekend, something special happened. Here is the story, as shared by Team Manager,  Dave Brock.
Our boys played with sticks taped in the colors of the Bulldogs on the very rink that one of the boys lost played on.  Coach Woolsey turned this into a teaching moment that transcends hockey.  As our boys took the ice they skated around the rink with their sticks held high, not clanking against the glass as they sometimes do.  They understood what it meant.  They were taught how to act and show respect in such an environment.  The coaches, parents, players, and mangers of the Bulldogs were very moved by this gesture.  We were thanked many times for the kind gesture.
Below is a Facebook post from one our moms, Kimber Lynn Myers, of an encounter she had at the rink that day.

Today before our boys took the ice, I had the absolute honor and privilege of meeting Mr. Walter Connolly. For those of you unaware he is the father of the 2 young boys, Logan and Briggs that perished in a house fire on October 30th.

I was taking this picture of the memorial just outside of the rink paying tribute to his 2 sons when he walked outside chuckling that he nearly photo bombed his own sons' memorial. I had no words and I'm sure I looked like a deer in headlights. He thanked me for taking the picture and taking the time to pay my respects. He told me that through this tragedy he has really learned what it is to be a "hockey family" and how grateful he is for the support he's received nationwide as well as how very overwhelming it is. That gave me chills and brought tears to my eyes.

I stood listening to him talk for just a couple of minutes. He told me that he's the lucky one because he got to be the dad of those two boys for 11 and 9 years. I told him how terribly sorry I am for his heart and his loss...I can't even begin to fathom nor do I want to. I told him that our boys came in from Kalamazoo and wanted to also show their respect to the boys so they taped their sticks in the team colors of his sons teams. He gave me a giant hug and told me to thank the boys and let them know how classy that is.

I am honored to have met and hugged this man and to have shared such a somber moment. I'm am truly humbled to have crossed paths with him.

Hockey family is truly like no other. Blessed to be a part of this great family.

We couldn't be more proud of this team, Coach Woolsey and his staff, and all of the families for representing KOHA and yourselves with such honor and compassion.   #weAREkoha 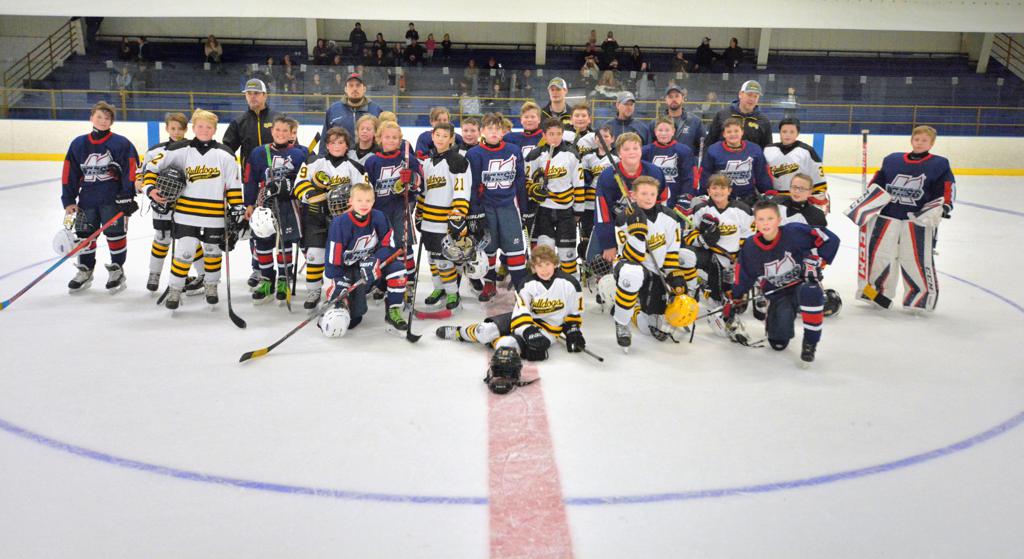